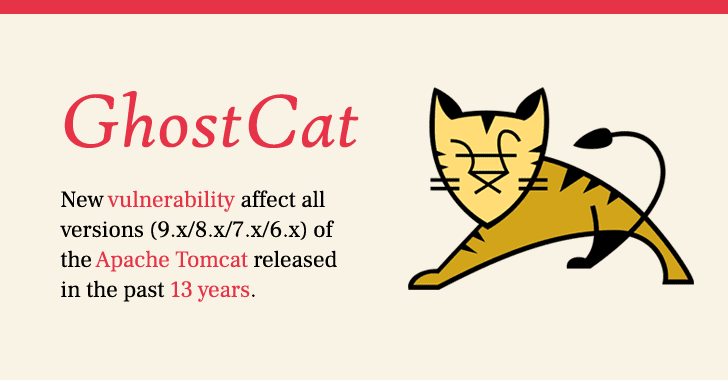 If your web server is running on Apache Tomcat, you should immediately install the latest available version of the server application to prevent hackers from taking unauthorized control over it.

Yes, that’s possible because all versions (9.x/8.x/7.x/6.x) of the Apache Tomcat released in the past 13 years have been found vulnerable to a new high-severity (CVSS 9.8) ‘file read and inclusion bug‘—which can be exploited in the default configuration.

But it’s more concerning because several proof-of-concept exploits (1, 2, 3, 4 and more) for this vulnerability have also been surfaced on the Internet, making it easy for anyone to hack into publicly accessible vulnerable web servers.

Dubbed ‘Ghostcat‘ and tracked as CVE-2020-1938, the flaw could let unauthenticated, remote attackers read the content of any file on a vulnerable web server and obtain sensitive configuration files or source code, or execute arbitrary code if the server allows file upload, as shown in a demo below.

What is Ghostcat Flaw And How Does it Work?

According to Chinese cybersecurity company Chaitin Tech, the vulnerability resides in the AJP protocol of Apache Tomcat software that arises due to improper handling of an attribute.

“If the site allows users upload file, an attacker can first upload a file containing malicious JSP script code to the server (the uploaded file itself can be of any filetype, such as pictures, plain text files, etc.), and then include the uploaded file by exploiting the Ghostcat, which finally can result in remote code execution,” the researchers said.

Apache JServ Protocol (AJP) protocol is basically an optimized version of the HTTP protocol to allow Tomcat to communicate with an Apache web-server.

Though AJP protocol comes enabled by default and listens at TCP port 8009, it is bound to IP address 0.0.0.0 and can only be exploited remotely when accessible to untrusted clients.

According to ‘onyphe,’ a search engine for open-source and cyber threat intelligence data, there are more than 170,000 devices that are exposing an AJP Connector to everyone through the Internet, at the time of writing.

Chaitin researchers found and reported this flaw last month to the Apache Tomcat project, who has now released Apache Tomcat 9.0.31, 8.5.51, and 7.0.100 versions to patch the issue.

Web administrators are strongly recommended to apply the software updates as soon as possible and advised to never expose AJP port to untrusted clients because it communicates over the insecure channel and meant to be used within a trusted network.

“Users should note that a number of changes were made to the default AJP Connector configuration in 9.0.31 to harden the default configuration. It is likely that users upgrading to 9.0.31 or later will need to make small changes to their configurations as a result,” the Tomcat team said.

However, if, for some reason, you can’t upgrade your affected web server immediately, you can also disable the AJP Connector directly, or change its listening address to the localhost.